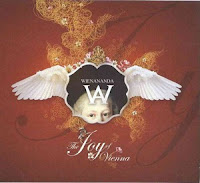 Great! Again one of the most wonderful CDs which I have ever got. When I heard it for the first time it was like I went several decades back – the time when Universal silence, also a very nice album, was made. Yes, this record of the Austrian group Wienananda is quite similar – both in music and in the feeling and songs. It is musically colourful, you can hear not only bhajans and the variety of well known sounds but also for example Irish motives – and it is really nice. I like the whole album very much and if you see it anywhere, do not hesitate and buy it. It will play very often! 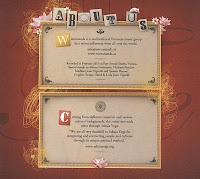 I asked Ronald Subkus some questions about this record:

Can you shortly write something about the group Wienananda?

Wienananda is a multicultural Sahaja music group that mixes influences from all over the world. Coming from different countries (Austria, Croatia, Rumania, Brasil, Poland, Germany, France and India) and various cultural backgrounds, the artists met each other in the Viennese Sahaja Yoga collective.The group started in 2008 with 3 people coming together to make music just for the joy of it. As the joy was growing so was the group. Right now we are 18. Some of us are professional musicians, most however hobby musicians. Because we enjoy so much singing together we called our group: Wienananda. "Wien" is the german name of Vienna and "Ananda" meens joy in Sanskrit language, the combination of these two names symbolizes the merging of cultures and can be translated as: "The Joy of Vienna". The „Joy of Vienna“ has also been chosen as title of the album.

The whole booklet is dedicated to Mozart, the pictures within show the period in which he lived. Why did you decide to make it this way?
Our idea was to create a design which showed Vienna’s cultural heritage. On one hand it appreciates the culture and on the other it makes a little fun about it. But actually the music of the CD is not specially related to any place or country. It is very multi-cultural. Mozart was chosen because he was the ultimate musician and very much related to Vienna. Most of the Sahaja Yogis will know that he is an incarnation of Narada, the divine musician. The graphic design is great art and has been made by David and Leela, a sahaja couple of Wienananda. The worked on it for 45 hours.. The joyful pictures have been taken by Vera (Amba). 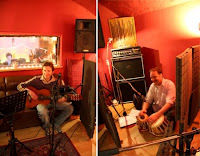 How did the idea to record an album like this come to you? Where did you record and how did you choose the songs?

The idea to make an album has been in the air for some time. Our desire was to spread the music we make to the global Sahaja collective and to all the seekers we meet in our concerts. Seven of the nine songs on the album have been composed by members of Wienananda. The last year was a great and blessed year for us and much music has been created. You can say the album is a mirror of the joyful time we had and the songs we sang. „The Joy of Vienna“ has been recorded in February 2010 at a live session in the Pure Sound Studio Vienna.

The record is not only sahaja, I also like the Irish motives, the variety of musical instruments and so on, it is a great idea. Can you write anything more about my favorite song Irish dance and about the songs Sahasrara Swamini and Shri Hanumana?

Yes indeed the the variety of instruments has shaped the CD immensely. The Irish or celtic motives have just been created spontaneously. Nobody planned to do that, but of cause we noticed it too. The whole album was arranged and shaped by the group and everybody contributed with a special skill. The "Irish Dance" has been written by Wienananda‘s genius guitarist Michi Paul. He always played it after our collective practice and we decided to include it in the CD. "Shri Hanumana Brilha Em Nos" is a song which has been written by our lead singer David. You might already have listened to his amazing composition "Drops of Love". Shri Hanuman was the first song he wrote when he was 18. We just discovered it on his laptop and have been playing it ever since. "Saharara Swamini" has been the first song I had written back in 2005. We felt very blessed when we could perform "Sahasrara Swamini" to Shri Mataji during her Austria visit in 2009. 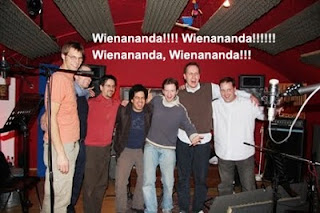 Where can your fans see the group Wienananda play? Are you going to make a video clip for Youtube?


Wienananda is regularly playing in Sahaja programs in Austria. In May we were invited to Hungary which was a great and wonderful experience. We thank our brothers and sisters of Hungary for the joyful time we had. After that some of us played two songs at the Sahasrara Puja Evening Program in Cabella. If there is interest of Sahaja Yogis to have Wienananda performing in their countries, we are happy to do that. We have a live clip of a concert in youtube, but we have not considered making a clip so far. But why not ? J

Dear all,
we are pleased to inform you that we have added to the broadcast five new albums. The first one is new album of Austria sahaja group Wienananda - The Joy of Vienna. Second one is CD of Sandesh Popatkar - Rhytmic waves and next albums are - Mauli - By Bhakti, Anandita Basu - Manan and Pt.Bhajan Sopori with Abhay Rustum Sopori - Fragrances of Cabella ..... 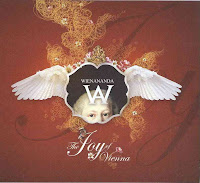 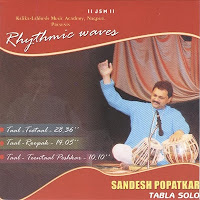 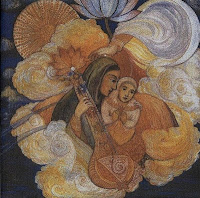 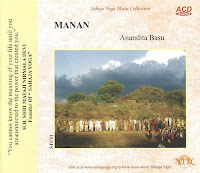 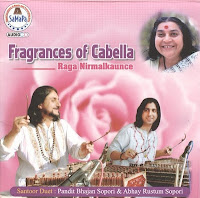 Pt.Bhajan Sopori with Abhay Rustum Sopori - Fragrances of Cabella
Posted by vlada at 8:59 AM No comments:

Sahaja Yoga Radio - 4th in the list of live365 recommendations 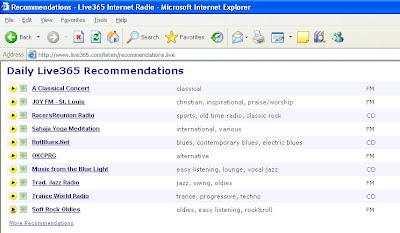 From over 6000 radio stations, live365 is displaying Sahaja Yoga Radio 4th in the list: http://www.live365.com/listen/recommendations.live

Posted by Dragos at 8:48 AM No comments: