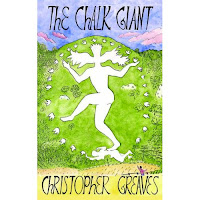 The Foundation is happy to inform you of a new sahaj book for children and 'young adults', THE CHALK GIANT [It is also entirely suitable for older adults, I should add!]. Written by Chrisopher Greeves, a Sahaja Yogi from the UK, it is a charming, witty and exciting story with an unusual theme...

At the end of a long, dry spell of weather, the story's narrator, young Dan Waterman, sees something extraordinary - the faint traces of an ancient giant figure cut into the side of one of the chalk hills just south of London. [There are several such figures in England.] Stranger still, this figure is of Lord Shiva dancing. Dan's father is enthralled - being a historian, he knows how remarkable this find is.

However, the following day it rains, the grass grows, and before they can arrange for an aerial photograph of the site, the image is lost.

What happens next precipitates Dan's father into despair, makes enemies of Dan and his sister Clara, and leads closer and closer to the carving of a very different image on the hill.

It's up to Dan to save the day by finding proof that the chalk giant existed - only thus can his father's work be accomplished and family harmony be restored. But how and where can such proof be found? And who is that sinister figure who, somewhere in the background, is also searching for proof? What does he want it for? Confronted with a surprising range of enemies, can Dan find what he needs before it's too late?

The novel is written for both Sahaja Yogis and non-Sahaja Yogis - but the former will recognise at once the symbolic dimensions of the story.

One further point: this novel is part of a much larger project to produce a critique of contemporary culture on the one hand, and to contribute towards the establishing of a sahaja culture on the other. One other part of this project, SOPHIA, has already been published in Russia. For more information about this project, you can e-mail the author at Christopher2.Greaves@uwe.ac.uk

THE CHALK GIANT by Christopher Greaves [ISBN: 1-4259-3897-3 (sc)] is published by Authorhouse and is available from Amazon or Authorhouse, or can be ordered from all good bookshops.
Posted by Dragos at 9:36 PM