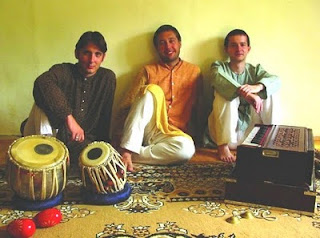 Today I am here with a short view on one of well-done album. After some time my hands put into the CD player one of those older CDs, which I did not listen to for quite a time. The musical wind will take us this time to Romania where the band Sangeet Lahari is. This album is really good, full of joy and full of nice bhajans. It reminds me very strongly my favorite remastered double album Music of Joy. Tablas and drums run in a quick rhythm, singing and other instruments are professionally mastered. It has no sense to write more about this album, much better is put it into the CD player and push the buttons. The mood arrives immediatelly together with vibrations and you are enchanted by that undescribable inner feeling of joy, which is also the title of the album – Inner Joy … 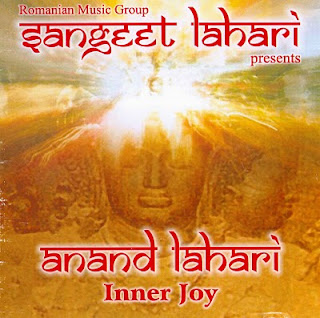 … I remembered the meeting, which took place in 2004 at the festival in Borotin, where I could sit down with them and have a talk. All the group members are very nice and polite people, and those, who were present at the koncert, will agree with me, that it was one of the highlight of the festival. Now, I am bringing the part of the interview:

I welcome Sangeet Lahari at this table. The short interview, which we will make now, is planned for our weekly. At the beginning I have heard that you have just ended some tour round Western Europe. How did it come, that you travel round Europe like this?

Yogis from France sent us the invitation for this tour. And while in France, we also received invitations to have concerts in Spain, one was in Belgium, in Brusseles.

Your album Inner Joy, which was on sale some time ago in Cabella, belongs to my favourites. So I would definitely like to introduce shortly our revers with your group. How was your group formed, how your members came to sahaja yoga – just give me some brief answers.
We were all grouped together by sahaja yoga. No harmony and no friendship among us would be possible without yoga. As the matter of fact we met only because this is our single purpose – to spread this yoga. At the beginning we were not planning to set up the professional group, but simply to spread sahaja yoga. 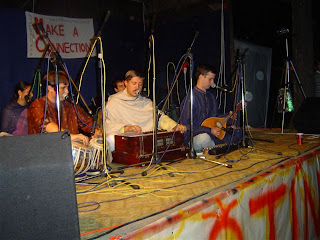 How long have you been playing?

It is individual. Some of devote to music for 6–7 years or even more. Andrej is a professional musician and plays for a long time. As a group we are together for 9 years.


The album is professionally very well done, well recorded. Where did you record it? Who helped with it. Were there any professional musicians?

It was the first time we worked in the studio. We did not know exactly what it would be like. We thought, that we simply come, sit down and simply record it. Gradually, as we were learning how it works in the studio, the album got another face. This CD was recorded in Kruz in one quite cheap studio. It took us a very long time to record it, but we did it correctly. We found out how to make it and we also found many possibilities of that studio. We met one studio engineer of our age and he learned us many useful things. We became very good friends. At the beginning he did not like our music at all, but after a few days of recording he became to like it. Now he is interested in yoga very much. 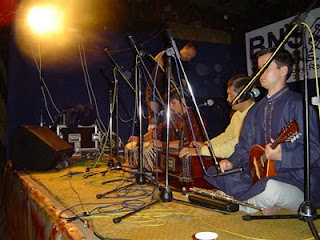 From my point of view the album is very good – there are bhajans and also mantras. When I listened to it for the first time, I realized that at the end there is sahasrara mantra – it was a good idea to take it over and try to remake it your way.

Sudhir Chitale studied in India at Arun Apte. He learnt those mantras in individual rajas. We wanted to put it into this CD, so that people could feel that state, which we are experiencing, so that they could feel it through this mantra and raja. When we play at concerts people usually stand up and dance. It is difficult for them to stay sitting at one place. So through this experience we can bring to them little peace and joy and there is no need for applauding. We want them to feel it, to perceive it … 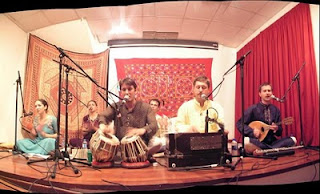 That´s all - and then my batteries in my recorder got low....
Sangeet Lahari on YouTube
Posted by vlada at 1:58 AM