Santa Cecilia and Ketil Fersum are back ... Part. 1

After a short time break, in our blog we would like to re-introduce the singer and composer Cecilia from Norway. Last month she came to our country for a small tour together with Ketil Fersum, a guitar- and drum-player. In our small towns she introduced her new songs from the ready-made album and she also took part in the tour with the Indian dancer Sandeep Bodhanker. We asked a few questions, what´s new: 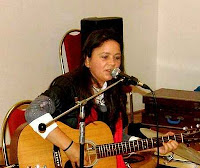 Hi, Cecilia, I have heard that you spent this summer in Cabela and composed there the songs for your new album. How is the work going and when can we look forward to your new CD?

Hi, I spent three and a half month working as a volunteer in the Castle. I also spent some time with the yogis in Albenga (A three and a half hour drive from Cabella). It was really good for me to be away from my normal environment for some time.
Yes, there will be a new CD.
We will soon be back in studio, but I can‘t promise any specific time for when it will be finished. But definitely in 2011, maybe it will be ready for Shri Adi Shakti puja or before.
There are still new songs coming for the next CD. With me anything can happen. Sometimes things go very fast. It depends on what Mother wants. I trust Her, She knows. As all the rest of my life is depending on Her. Sometimes I have to travel somewhere to find a detail for a song, or to meet the right person. And sometimes the answer it’s already there inside. Or maybe I have to give someone self-realization to open up a new door inside of me. This is how things work for me. Suddenly the CD is there, and I feel that I have not done anything. I don’t push myself, She pushes meJ. And I feel the time is right to start studio working now. 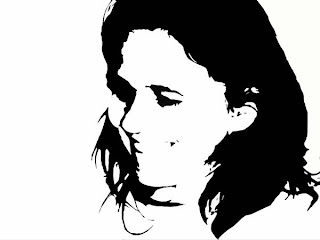 What is the new album about? Will it be also as inspirative as the first one?

The new CD is about „ LOVE“. Love written in different words. For me there is nothing else to write about. When I feel the pure love, it inspires me to write. When I was in Cabella, my heart started to open (as it often does when you are in Cabella). Then I feel more like a universal being. I am not a Norwegian; I am totally a Sahaja yogi. And my heart belongs to all my brothers and sisters. I have met such beautiful brothers and sisters, to whom Shri Mataji has given me the blessing to write new beautiful songs. The more I grow spiritually I feel the love is shining through the music. The new album will be more open, and the songs are simpler, even for the people who are not sahaja yogis. Maybe I could call it more collective songs? It is not for me to judge, but what I know is that I am in love with the music. 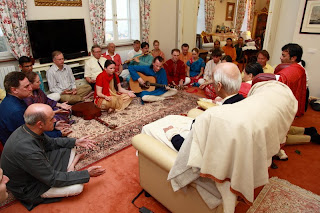 On the net I have seen that you got the blessing to play directly for Shri Mataji who presented you and Ketil her darshan. Can you write anything about this precious moment?

It all started before Shri Adi Shakti puja, at Sahasrara puja. I wrote a poem „The kingdom of love“ to Mother. And before I knew what was happening (When we where giving the gifts after the puja), I was standing in front of Mother reading the poem. I can’t describe the spontaneous feeling of love I felt reading the poem. For me this was one of the greatest experiences I have ever had. Because I was never expecting it, it just happened. And one of my dreams was to sing one of my own songs in front of Mother. Instead I was standing in front of Her reading a poem.

After this experience, I just knew in a way that I was going to sing in Her presence. I was ready to sing for Her, I felt it. You feel when She is calling for you. And then we were invited. But I remember sitting in the car driving to Genova. I just wanted to sleep. And the only thing that I was thinking of was how can I sing for Her when I feel so sleepy. But when we arrived I woke up from all the clearings.

It still seems like it was in a dream. Sitting in front of Shri Adi Shakti, first I was singing rag Darbari,(“Shri Kalki“ of late Dr. Arun Apte), and then I sang „She“, one of my own songs. Looking Her in the eyes when I was singing. There are just no words for this happening because it is so great. Only tears. It was like I was giving Her back what She had given to me or to us. And it felt amazing when we all sang together some parts of the song. I asked people to sing. It was a very important happening to me. It was after this darshan She gave me the inspiration through the yogis to write new songs. She is the inspiration, She is everything. 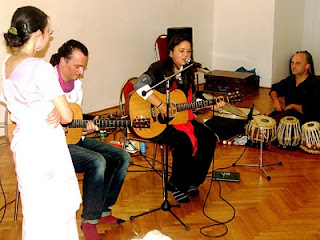 Together with your husband Ketil you have recently played in the Czech Republic on a small tour. How did you like playing here and what was the audience like?

I met Lenka Pokorna in the castle at Ganesha puja in Cabella. I had just finished composing two of my new songs. So I had a little concert in the kitchen for her and some Czech yogis introducing the new songs. After the performance Lenka invited me to join the tour. And it immediately felt right, so I accepted

The tour in Czech was a good experience. And it guided me, or pointed out for me, what I am. I am a Sahaja yoga artist. The way of spreading the music is by being in a Sahaj team. When we where out there in Czech, it was not just me as an artist, but the hole team that worked together. I am very thankful for how we where received and taken care of by the collective in Czech and the Uvaly ashram.

I had such a great support from my two team sisters Lenka Pokorna and Keira McGrava from Scotland. I m very pleased, because after this trip I got so many spiritual blessings. It has lifted me up to a new level of meditation and music. This I can not describe in words, I just feel it through the vibrations the strong and beautiful love inside.

Playing for the new people in Czech, I felt often very amused, because it was like they did not want to reveal their feelings. But I could see their feet moving up and down. Some of them felt some tears too because their heart opened up. It was sometimes hard for the system to cope with the clearings. But I quickly forgot it, because of all the love I felt seeing peoples heart opening up. I have learned one thing through my journey in Italy and Czech, and that is to try and make people participate, to show that they are a part of the happening. That is why I call the new songs „more collective“. It is easier for them to sing with me, on some of the parts. And then I feel their hearts open up. We are like children, we like to be entertained, but we also like to be a part of the entertainment.

THE KINGDOM OF LOVE

You decorated my body
With the crown of glory

So that I could melt into oneness

So that I could rest in your cradle