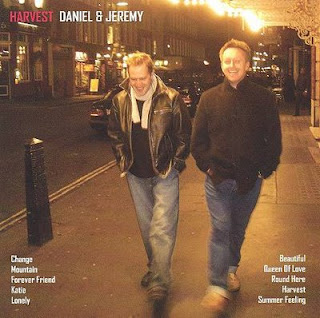 Harvest – it is the name of the CD of two Sahaja yogis, Jeremy Clancy and Daniel Wagner. I have known Daniel Wagner because of his nice song She Does It All on the record of a band called IPO and I could hear Jeremy at the festival in Borotin 02, where he was the main character in a band of his friend Ian Bremner „Ian´s Friends.“ At that time he impressed me by his spontaneous singing and the guitar playing, which I immediately fell in love with. That is why I was first looking forward to his solo album which he was speaking about at the festival.But the record Harvest is completely different.
When I put it into my stereo when I came back from England, I could hear the singing of two musicians and got to the second composition (Mountain), by the way I got an idea – it is slightly like two singers Simon and Garfunkel, reported to the beginning of the millenium. Both singers support each other, the acoustic guitar and the electric guitar blends together and everything sounds really modern. No doubt of the British hand which is similar to present music groups in England.
Which songs impressed me most? Not only introducing Change with a part of a speech of Shri Mataji which speaks about the necessity of the change in our lives and not waiting for anything, then also swinging Katie which immediatelly became my favourite one, but of course, the most beautiful for me is still Harvest…You, who like this kind of music, the sound of the acoustic guitar and simple songs, get this album… and just play it … it is very good .... really… 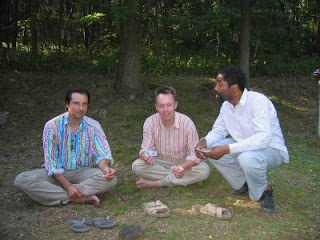 VH: I thought you would make your first album on your own. How did this cooperation with Daniel and the idea of recording this album started?

JC: Daniel and I used to meet up regularly a few years ago to write songs. Every Thursday and sometimes monday to. We always intended to record our songs but to anyone who has tried to make a recording of a musical performance there is a lot of bad emotion tied up in the experience and often what you end up with has nothing of the magic the original songs had to you; so, we put things off for about 7 years. Then finally after all that time we decided that enough was enough and got down to recording them. And that's what we did - with a couple of guitars and 4 microphones. The drums, the guitars and all the other stuff was put on later. 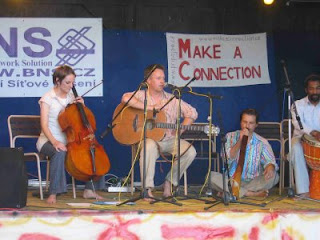 
VH: The title song Change is about an opportunity not to miss a chance for a change in one´s life. What was the inspiration for writing this song?

JC: The song "Change" was written in Chelsham Road, the very first ashram in the world that Mother established. Daniel and I were sitting on the floor and the whole verse melody came in a flash. After that we messed around with what we had and the song gradually assembled itself. We wanted the song to be positive and confrontational - blasting peoples apathy and self doubt with a splash of joy and mirth. That's what we intended it to be. Change - you can make it! What are you frightened of anyway?
One of the main reasons Daniel and I used to meet up to write songs was to try to communicate some of the joy and and depth we had both experienced of Sahaja Yoga in the idiom of popular music. We always wanted our melodies and arrangements to be easy on the average ear but secretly hoped that they would somehow register with the listener on a deeper vibrational level. I don't if we achieved this but we still feel that it should be done. 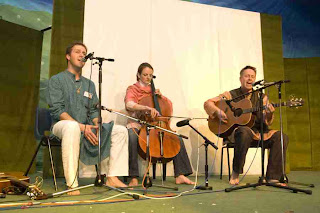 Sahasrara 2006 - England
VH: Your songs are about an ordinary life, about Shri Mataji, about Self-realisation. How are such compositions made?

JC: All the songs were created in different moods. What tended to happen was that I would sit across from Daniel with a Guitar and after raising our kundalinis or saying a prayer to Shri Saraswati, or something, we would just start singing stuff hoping that some utterance would lead us to a song. Sometimes a song would come in its entirety - other times nothing but an odd phrase would come and at times, of course, nothing at all would come. It's like fishing! Daniel and I used to share the philosophy that the great songs are already in existance somewhere in sahasrara and it is our job to try to harness them and bring them down to earth without spoiling them too much. Bob Dylan says the same thing so we are in good company! 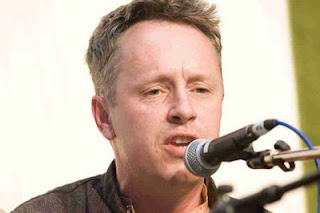 VH: Why the name Harvest? (By the way, my favourite song…)

JC: The song Harvest - started as a mood I seem to remember. The word itself Harvest is so beautiful - the sound it makes when you say it and the power and imagery the word seems to contain. I recall a lot of christian songs I heard as a kid and maybe I was influenced by them. I love the idea of a Karmic Harvest at the end of days when "all that we sowed we shall reap and all that we gave we receive". Awesome. Maybe it is like this. The melody was based on the chord pattern and really came to life when Daniel created the harmonies. When the mood is right we still enjoy singing this song.

Links: videos on YOU TUBE
Katie´s song , So Free , England ,