VH: In year 1998 you came back to Academy where you started to study ragas and interconnection between music and chakras. The product of your studying was album Sahaja Yoga Awakening (first version). It offers listening of short ragas on all chakras . Where is the origin of this idea to record this kind of album? And how long did you work on it? Could you give me advise how to listen it in the best way? 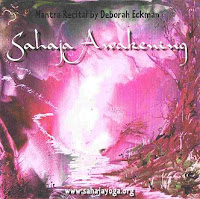 DE: The origin of the idea to make this CD was somebody hearing me in America singing the mantras in this style and asking if I could record them to put on a website, initially. I was so happy to be able to give back something in this way, as the time I spent in India learning it was so beneficial to me and helped me so much during quite a tough period of my life. This first version was only available as mp3 and it didn’t take long to record. Then I just sent it to a yogi in the UK to convert to mp3 and it was ready.

But then, a few years after that, I heard that the website had collapsed but people were still interested in hearing the mantras so I decided that I should record them properly and make a CD. I was in Canada by then ( lots of interesting stories of how I got there, but maybe another time!) and there was a very kind yogi who had some recording equipment and a very small closet/cupboard, where I shut myself in for a few hours! It was again very simple to record as by then, I had been singing the mantras nearly every day for 4 years, and the recording only needed my voice and my electronic tabla. Also, I had composed a few different ones which I wanted to include this time. Most of the ones I learnt in Nagpur were exactly as Arun Apte taught us but there were a few that he didn’t have time to show us, and so once I knew the Ragas, I was able to arrange new ones myself. At first, I only made a few copies of the CD as needed, as I couldn’t afford to produce them professionaly, but once I realised how many people were interested, I found a proper printing place and made 500 copies. The whole process seems to have taken at least 3 or 4 years till they were ready to sell worldwide. I don’t really know the best way to listen, as I don’t normally do that! But, you can either use the tracks individually to work on certain chakras, or listen to tracks 1-8 for clearing just the Left Channel or tracks 9-16 for working on the Right and Centre. Also, once you can see what Ragas are good for certain chakras, you can also find other music – maybe instrumental Classical Indian – that also use these Ragas. You can also experiment by just listening to Ragas and trying to feel which chakras are affected, as there are probably quite a few that can work on the same chakra. My CD only highlights one for each.

VH: Your music is on CDs Millenium, Eternal Roots and Blossomtime too. Each song is different it shows your scale and possibillities.. Could you write me shortly about these compositions?

DE: Coming Closer – This is from Eternal Roots which was recorded at Nagpur. Most of us had songs that we had written before and wanted to include on the album. My other song on there was In the Beginning. My songs are composed in all sorts of ways and at all sorts of times. Sometimes I just hear a melody in my head, or lyrics just start coming. Other times I can be just playing on the guitar and some chords start coming together. Coming Closer, I seem to remember, was one of those songs that just popped into my head while I was out walking my dog!! When I got home, I immediately went to the piano and wrote down what I could hear in my head. But it was a couple of years before being at Nagpur and I hadn’t been able to record it properly. So, one day when we were discussing what songs to use, I started singing this to everyone, and it developed into what you hear on the CD. 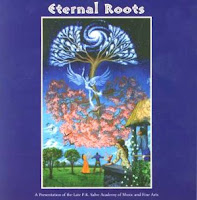 Guru Mantra – I don’t remember how this one came about, but I think the inspiration was partly from hearing another yogi singing a song called Guru Mother on an album, which I think used part of the mantra, although in a very different way to mine. She had been in a pop band and was the first person who practised Sahaja Yoga to have commerical success. Unfortunately, it was very hard for her in this business, and she became a bit shy after that and has not really been seen much since. But, hearing her song must have triggered something in me and my song manifested.

I also have two songs on the Eternity CD, which I think came after Blossomtime. These two are Now that I have Found You and Here for a Reason. 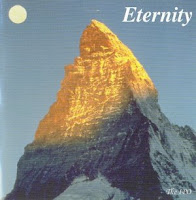 VH: I know that you cooperate with TEV. How this job fill you up and how do you feel about it?

DE: I joined TEV right from the beginning in May 1996, which was just after coming back from Nagpur for the 1st time. I was obviously in the creative mode and wanted to continue. I hadn’t done any acting for a long time but this felt so good to be involved in a Sahaj Theatre Company. It was very hard for us as we spent over two years together on and off, mostly just with one play that we worked on, The Imaginary Invalid, but we very rarely got any payment so we always had to go back to our normal lives in between and get jobs so that we could afford to tour again. Any money we did make usually went on costumes, travel, food etc as there were at least 16 people involved in the play. But it was an amazing experience and, although I wasn’t involved in the Magic Flute and other projects, as I was concentrating more on my music, I hope that we will be working on a new project together soon.

VH: Did you ever play for Shri Mataji and where was it?

DE: With Her Blessings, there have actually been quite a few times so I won’t mention them all, but performing with TEV twice – Ganapatipule Dec.1996 and Cabella for Guru Puja 1997, as well as being part of the UK puja plays a couple of times – Navaratri 1997 I think was one. With my singing, I have often been asked to sing harmonies on other peoples‘ songs but the first time I sang one of my songs for Her was also Navaratri 1997. While I was in the USA 2001-2002, I had the immense blessing to sing for Her during 2 birthday parties for Her great-grandson, Anand. This was at the ashram in LA and was truly an amazing experience as She and Sir CP were sitting so close to us.

I have also danced for Shri Mataji at Navaratri Puja 2002 at Lake Piru, LA, where I performed a tap dance. I think it was the first time anyone has tap danced for Her. It was also the first time I had ever danced in public, as it was only something I did for my own enjoyment, so I was very nervous, as most people only know me as a singer or actress. I did nearly fall over during one part, but I hope She enjoyed it anyway!

I hope I have answered your questions ok – they were good question!

Here we will say good-bye to Debbie Eckman. Her last, the fifth songs CD ABOUT TIME introduces here in another level – she is rather a singer of her own songs in present modern pop/jazz style (although her two last songs are mixture of eastern music and various experiments). The CD Sahaja Awakening still remains her most important piece of work. 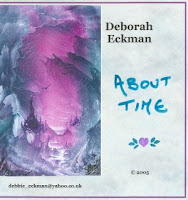