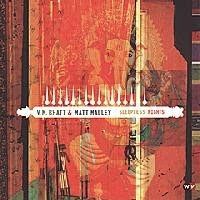 At first, before you actually hear it, the idea of a collaboration between Vishwa Mohan Bhatt and Matt Malley might strike you as strange. What, you might wonder, can an Indian virtuoso, who created a 20-stringed hybrid slide guitar he calls the Mohan Veena, possibly have in common with the former bassist of the popular American rock band Counting Crows? But one listen to Sleepless Nights, their tandem effort on World Village Records, released April 13th, quickly answers that question: V.M. Bhatt and Matt Malley share a vision. Indeed, in retrospect it seems their paths were meant to cross.

Sleepless Nights is a sublime work, resplendent in multiple colorings and ever-shifting moods, its melodies entrancing and its rhythms spellbinding. It’s saturated with spirituality and heart, a sound at once ancient yet timeless. In six long-form tracks, Bhatt, who composed all of the music and leads the way with his Mohan Veena and vocals, Malley (on basses and keyboards) and Subhen Chatterjee (tablas and percussion), invent and explore new worlds while bridging distances in this one. As Vishwa says in the CD’s liner notes:
“To me, music is the language of the gods, enfolded for the benefit of mankind…This album is an endeavor to spread the message of love and harmony all over the world.”
You can’t experience Sleepless Nights and not feel the love and harmony it radiates. 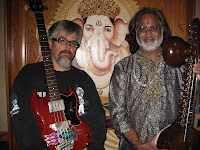 For the Grammy-winning Bhatt, this newest venture extends the reach of his groundbreaking work with the Mohan Veena into new, uncharted territories. A disciple of the legendary Ravi Shankar and a friend of Eric Clapton and the late George Harrison, Vishwa has revolutionized the slide guitar by modifying an archtop that he plays lap-style. “The majority of the strings, 12 of them, are called sympathetic strings,” Bhatt says. “They act as a natural reverb. When playing a note on a melody string, the corresponding sympathetic string will resonate and add a dimension to that note. Five strings are called chikari strings and they are played with the thumb mostly during the faster sections of a Raag. The remaining three strings are the lead, or melody strings.”

By Easternizing the instrument, customizing its design and shape, and adding strings, Bhatt has enabled the Mohan Veena to take on the role usually performed by the sitar and sarod in Indian classical music, while retaining the Hawaiian and blues slide sounds familiar to Western ears. Bhatt’s 1993 collaboration with Ry Cooder, A Meeting By the River, won a world music Grammy and he has also collaborated with such major talents as Taj Mahal, David Hidalgo, Bela Fleck and Jerry Douglas.

Matt Malley, himself a Grammy, Oscar and Golden Globe-nominated songwriter, arrives at this musical juncture from a far different starting point, but he shares with Vishwa a reverence for “the language of the gods.” A co-founder of ’90s sensations Counting Crows, Malley left the band in 2004 to spend more time with his family, produce records and play as a session bassist. A fan of Indian classical music since the early ’90s, Matt met Vishwa in 1998 while on a meditation and yoga pilgrimage in India in 1998. At the suggestion of Sahaja Yoga founder Shri Mataji Nirmala Devi, Malley began to study the Mohan Veena, and a meeting with Vishwa soon followed.

“When I started listening to Vishwa’s records, I realized how deep of a lake he really is,” says Malley now, “with unbelievable depth and expression coming from his guitar. Then, seeing him live, it took on a whole other meaning. It really feels as if he can sense the audience as a collective and can blow the roof off of his concert halls. His live concerts are a true joy to behold.”

Malley subsequently journeyed further into the world of Indian music- he fell in love with its quest for “the abode of the spirit”- and when the opportunity arose to make a recording with V.M. Bhatt, whom Malley calls his musical guru, he rejoiced, both for the spiritual bounty the alliance stood to offer and for the musical challenges it presented. “Playing with Vishwa is a whole different experience,” he says, “the perfect blend of artistic free-flowing creativity mixed with the utmost in strict rules—both hemispheres of the brain. Vishwa is a perfect example of a music guru. His technique is unparalleled but his humility and decency are the same.”

The third component on the recording, tabla drummer and percussionist Subhen Chatterjee, is the solid rock that binds Bhatt’s glorious fretwork and Malley’s inventive bass and keyboard playing. A veteran musician who has toured with many of India’s greats and has recorded for Peter Gabriel’s Real World Records, Chatterjee is a virtuoso whose resourcefulness and innate command help propel the music to another level altogether.

The pieces that comprise Sleepless Nights reside in a common place where Indian traditional music meets the more cosmopolitan nature of contemporary world music. Influenced by classical ragas, they nonetheless transcend the strict constructs of Indian classical and become something new and exciting in the process. Recorded during a three-night session at Malley’s home studio, Sleepless Nights was initially assembled with Bhatt leading the way melodically and Subhen played along in the studio.

“More than 90 percent of Sleepless Nights was improvised,” says Bhatt. “I composed during the recording and performance of the songs. There were no retakes or edits on the Mohan Veena. It was raw; whatever came during the recordings is what was recorded.” Malley composed his own parts and added harmonic structure with his bass and keyboards after the two Indian musicians had left California, perfecting the recording until the finished album emerged.

“This record is the artistic mountaintop of my life so far,” says Malley. “I couldn’t be more excited to have made a record with Vishwa, and to reinvent myself publicly as a world and Indian musician.”

Adds Bhatt: “All six pieces have turned out beautifully and I listen to them all the time. Also, the recording quality is excellent. I am very happy with the way that our record has turned out.”
Anyone fortunate enough to hear Sleepless Nights is bound to feel the same way.

Samples of the music you can find on World Willage