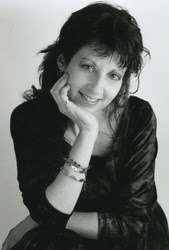 Those who follow musical scene in Sahaja Yoga certainly have noticed the promotion of Victor Vertunni´s new album – Songs of Innocence and Experince. It is a collection of musical poems by the English poet and painter William Blake. The whole album seems to be a sequel to Victor´s previous album which was released in 2004 and was a real gem for all collectors. You can find the songs from this album also on a website where you can buy various formats. Among other guests Deborah Eckman participated – we know her from her magic mantra album and from a theatre performance devoted to William Blake. I took the liberty of asking her a few questions.
Deborah, we haven´t heard about your music for a long time. We only learnt about the re-edition of your beautiful album Sahaja Awakenings. Now you are presented as a supporting singer on Victor Vertunni´s new album. How did it happen?

Obviously I have known Victor and his family for a very long time, since we began in Theatre of Eternal Values together in 1996. We used Victor’s original Blake CD as the backdrop to our play on William Blake’s life – William Blake’s Divine Humanity – which premiered in 2007 and so I knew a lot of the songs from then. Occasionaly I also sang with Victor at concerts in Cabella, so when he asked if I would like to record harmonies for his new CD, it was great to try out some new ideas, and to help a brother of course!
You also participated in many performances about William Blake´s life. Are you more a singer or a theatre-player? What did your theatre role about his life bring to you?

This is always a hard question for me to answer, as I enjoy both very much, although I am also dying to work in film…! I wrote on my website recently that it is hard for me to separate between being a singer/songwriter and an actor, and also an artist, so I just follow where Shri Saraswati leads me and try to allow equal time for all. William Blake was not only an extraordinary visionary, painter and poet, but he even designed a new way of printing that was the blueprint of our modern printing press. He was all of these things, yet he never compromised his ideals or beliefs, being of course an incarnation of Shri Bhairava. In the process of researching His life, I realised that, despite it being an extremely complicated way of living my life, it inspired me to trust that all of these creative aspects are inherent parts of my personality and need to be expressed at various times.
You spent much time in Italy and you belong to the team preparing the Culture of the Spirit Festival. How do you like this work and how does this experience enrich you?

I am more part of the team for helping with the Nirmal Arts Academy, which is now in its 6th year, although I do help a little with the Culture of the Spirit Festival, which happens just after the Academy finishes, as they are both organised by Purna Vertunni , and of course Victor. I always feel slightly nervous before it all starts as there is SO much to organise and we always find new problems every year that didn’t exist before! But we also solve lots of problems and everything always turns out great in the end, especially with amazing performances at the Festival to enjoy. This year I also got the chance to sing a couple of times, which hadn’t happened before as I am usually too busy running around!
Many of us (including me) would like to see your new album. Is there any hope for us? Are you working on something?

There is always hope… I didn’t sing for a few years, so taking part in recording Victor’s CD was a big thing for me and allowed me to find my confidence again. I have many of my own songs that have never been recorded, or even heard by anyone other than my dog when I am practising at home, so I hope one day the paths will clear for me to achieve this dream of mine to share my songs with everyone. I created a new song for the Festival this year, using the text of Shri Mataji’s poem ‘Dust‘, which I performed on the 1st night with Victor’s son, Leo (and which hopefully was videoed!) I would love to have the chance to record this one day, as well as some other ideas I have.
See: http://www.deboraheckman.co.uk/
Posted by vlada at 2:16 AM

What is so amazing with the practice of Sahaja Yoga is that through it pure creativity springs; as you say Deborah, so spontaneously that the artist's talents can be expressed in many many ways. Actors are also singers, writers, musicians, and they indifferently blossom in / enjoy all these different aspects. For the enjoyment of us all.