Victor Vertunni - The Songs of Innocence and Experience 2 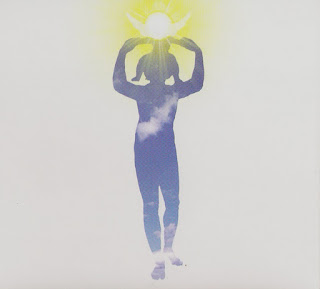 An English Artist, living in Italy, Victor Vertunni, is having a live stream performance organized on the 24th of November at the release of his new CD. It is a compilation of William Blake's poems set to music. William Blake was one of the greates poets of Great Britain and has during his lifetime ( 24.November 1757 – 12. August 1827) created a broad opus of poetry and paintings, hovewer it has only recently came to light that he used to sing his poems. The melodies of his poems have been lost, but Victor Vertunni had once again set to music Blake's poems, with a moderen arrangment, and has thus brought them closer to general public. With this the poetry of William Blake has become accessible and more easily understandable to general public. You are invited to join Victor on the 24th of November 2011 at 20.00 hours (CET) on : http://www.livestream.com/voiceofthedeep 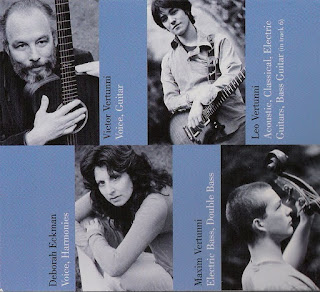 I feel that the sound of William Blakes' words have a magical quality of awakening our subtle awareness of the spiritual dimension of life in all its forms. Setting them to music was my way of opening up the deep meaning and beauty of each song. Our modern life cuts off the flow of natural and pure emotions which need to be released, the melodies and sounds of the words seem to work on our emotions - in a gentle and benevolent way.

On this album there are some famous songs from your previous album, but with a new arrangement. Was it your intention to remind people of these songs?

My first album was born while my sons, Leo and Maxim were still children, as they grew up they joined in as musicians. It was they who took the creative initiative and encouraged me to make these new recordings. The wide variety of styles of the new musical arrangements will bring it close to the hearts of more people - even if many fans have written to me saying they still love the acoustic album. 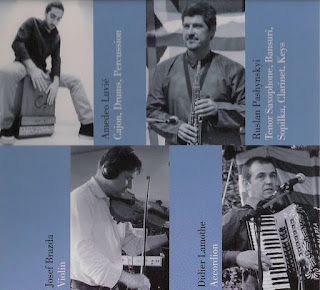 You invited some of your friends and musicians to help with recording, it was not a solo work as with your previous album. What made you do it?

Ruslan, Didier ,Debby and Josef (Brazda) and Amedeo have all played with us as guest in our concerts and deserved to have their musical contributions 'showcased' in this version. I love the feeling of playing in a band, you receive so much energy and joy listening and interacting with fellow artists, each one bringing their speciality to the whole. You will recognize, folk, jazz, prog rock even Flamenco... 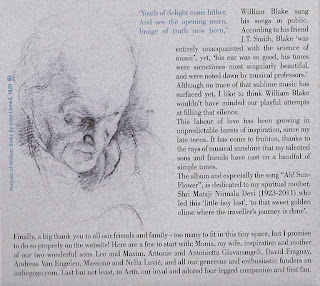 In the past you used to travel a lot and performed your theatre version of William Blake´s life. What was the reception of your performance?

We have played Eternity in an Hour in many European countries, USA and this year in Turkey. The audiences appear to be deeply touched in some way, they do not wish to leave their seats at the end as if in a joyful trance! The real test for this multi-media show was when we toured the national theatres of Turkey: Ankara, Bursa and Istanbul. Performances were full and audience members had tears in their eyes when we talked to them, even if they did not understand everything that was said, it was the energy and beauty that was felt.

What are your plans for the future? Do you plan anything to surprise us?

The world is in a moment of deed transition and artists must take their positions as channels to inspire evolutionary change. The real surprise would be if our 'underground' projects emerge into the limelight and receive more widespread attention. All of your readers can help in that sense, by telling their friends about us! Your interview, is an example of the kind of help we need. Thanks for your support!

Thank you for this wonderful music which really makes one feel the strength of the spirit within oneself. Everybody should know about it.