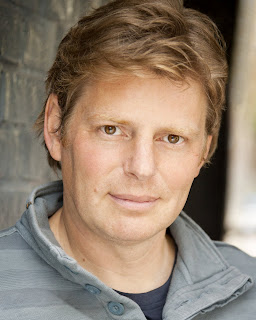 Rightfully we can ask you as our teacher – how can we master this way of pronunciation and mantra recital, what would you recommend for us to study?

Good pronunciation begins with good listening – not only with your ears but with your whole subtle system. As I mentioned earlier, Sanskrit is the language of the Kundalini, so be very sensitive to the vibrational response She gives to the sounds of the mantras. As far as recordings go, I would be very cautious of ‚Brahmin‘ versions of the mantras. I often find they catch on right Muladhara and have no devotion or beauty of expression at all. Their business is priest-craft. Better listen to devotional musical versions of the mantras where the heart and Spirit speak forth. Either Sahaj artists such as Subrahmaniam or the great masters of Indian Classical vocal music such as Rajan Misra. Alternatively, we ran a mantra pronunciation class at the Nirmal Arts Academy this year in Cabella which proved very popular. If the desire is there, I could always come to Czech and run some workshops! 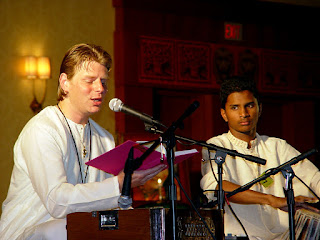 On your website I found, apart from Bhagavad Gita and Shri Ganesha Atharva Shirsha, also a recital of the sacred Shri Kungika Stotram mantras. What benefits do these bring to the one reciting them?

Complete bhakti and feeling completely dissolved in the bliss of that bhakti. It's like a blessing from Shri Shiva. When we enter into that state, it is pure Spirit.
Could we look forward to another project you might prepare in the future to help sahajayogis improve their spiritual growth?

We have just set up a recording studio in my home which will make it much easier to play with ideas and make them a reality. There are a number of ideas in the pipeline: for example, a sung musical CD of all the mantras for all the Nine Nights of Navaratri (probably in the style of the full musical version of the Devi Kavach). Other sacred texts such as the Shri Kundalini stuti stotram, Shri Suktam, Shiva kavach etc. I would love to make audiobooks of texts of spiritual interest such as Kabir, Kahlil Gibran, the Devi Mahatmyam, Ed Word's ‚Oakee Doakee‘ for children, Blake's prophetic books such as ‚Jerusalem‘ and so many more! Then we should encourage yogis to create much more original writing. We have a whole new Sahaj Culture to manifest and develop!! 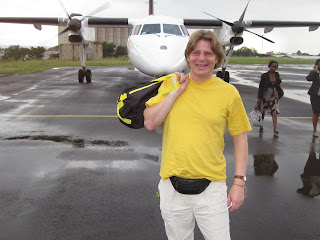 In 1995 a beautiful ten-part documentary about Sahaja yoga called ‚Experiment with the Truth‘, which was shot in the Czech Republic, came to existence. You as a guide voiced all its parts, how do you remember this work now, more than 16 years later?

Wow! That was the first big Sahaj TV project and people are still getting Self-realisation from it. Even now I get approached by new yogis from all over the world asking me whether i'm ‚that voice from the TV series‘. Believe it or not we voiced the whole series in two days. Actually one and a half days! The vibrations were incredibly intense and working with Gunter was a great joy as we have a similar sense of humour! We are still working together to this very day on TEV's production of William Blake. When I came out of the studio I was so tired that unfortunately I hardly noticed beautiful Prague. I only remember the wonderful light that played upon the water as I looked down from St Stephen's bridge and the wonderful creative energy coming from the river. But I was in complete bliss. Luckily I returned to Prague two years ago when I was helping to train up some staff at the British Embassy and finally got a chance to explore the wonderful architecture.
The third self-realisation tour of Ghana (from 20 Oct – 7 November 2011) is about to start and also you have toured to Kenya and Nigeria. So what attracted you to Africa?

I have felt that so far, we have somehow failed to reach out to the black community and that we had to go to the root, which meant giving realisation in Africa. Shri Mataji actually said very pointedly to the English yogis that they had to go there because of what their forefathers had done to the Africans during the Slave Trade and the days of Empire. She said that Shri Shiva was still angry at the treatment of his Sister Shri Saraswati and would only be placated by giving realisation to the children of Shri Saraswati. So we started arranging Self-realisation tours first in Nigeria where Obi in London is from, them in Ghana and last year in Kenya. In one TV interview we gave realisation to an estimated audience of around 2 million people from over ten countries. Also it is a very important chakra, as the Left Swadhishthana is where the Nirmala Vidya resides and I personally feel it is of huge importance to the continuance of Sahaja spiritual growth and evolution, to the full establishment and complete manifestation of Nirmala Vidya: the complete living knowledge of the Divine. Only then can we truly become the prophets and gurus that William Blake and Shri Mataji have prophesied. Only then can be so completely one with Shri Mataji's divine presence and manifest Her pure divine love. ¨

Tim, thank you very much!