When we talk about World Culture these days, we usually mean cultural imperialism, the Americanization of the globe. World Culture seems to indicate something so popular that it can only possibly appeal to the lowest common denominator , broad and gross.. World Music, on the other hand, is something quite different. This is more than just another category in the record shop. It didn't come out of the head the marketing executive. It came out of our need to know about our neighbours. And ourselves. With World Music, there is a respect for the sound, the instruments, the musicianship that comes from another land. It is a festival, a fusion, a romance. Here a sitar is a sitar and doesn't need to be restrung for Western ears. This is not the Coca-Cola-ization of the planet. It is the celebration of many tastes. 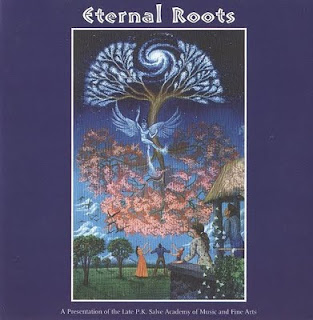 And so it is with a new CD called "Eternal Roots"? With a chorus of voices from several countries, the musicians of the PK Salve Academy of Fine Arts and Music are reaching back to a common heritage of this one planet. Touching the earth at their school in the heart of India, the musicians' stylings roam freely, but always come back and make reference to the classical forms of the subcontinent, as if finding themself in the other.

Eternal Roots begins and ends with Indian raags. These are deep, yet unadorned, classical movements played on a sarod and a santoor respectively. These are the musical roots, the basis for all our music, eternal, where we came from and where we are going. In between, like seven pearls on an anklet, there is the music of that journey around the circle. Played mostly in a Western popular style still, but imbibed with a Eastern depth and spiced with a masala of sarod, tabla, santoor, Indian violin and even a didgeridoo, the seven intervening tunes are, most simply, spiritual music. This is not the music handed down by a church, sung for generations without meaning, but it is spiritual music that looks inside. It introspects and comes up with something. It describes journeys that never end, that are intimately personal, at the same time universal and collective. 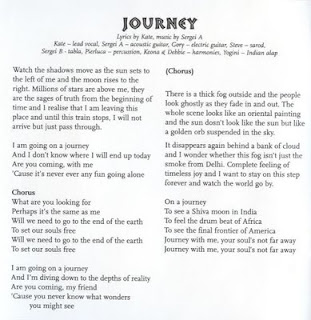 Katie Ferris Gleave sings in a signature tune "Journey": Until this train stops, I will not arrive, but just pass through… I am going on a journey and I'm diving down to the depths of reality. Are you coming, my friend, cause you never know what wonders you might see?… 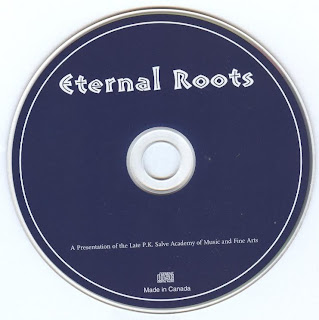 We all know these travels that seems to have no resolution, trekking across a continent and not finding anything so much as our own home in a backpack of memories.

Katie Ferris Gleave sings of the "Indian Sun": I see Indian sights all around. Will my feet ever feel the ground Of England, once again? ‚Cause England has always and always will be my friend. But there is a peace, a discovery and a resolution at the end of this journey. 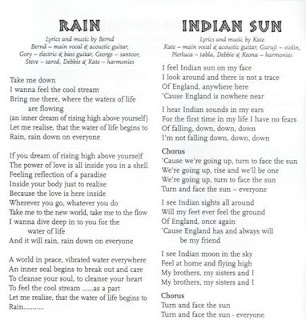 I would venture to say that it is because this music is rooted. There are strong guitar chords that make us feel at home. And there are harmonies and lyrics that are narrative, a diary of the trip. Like an impressionist painter who can improvise only because he really knows how to draw, these musicians can shape their music in popular Western conventions because they have tasted the real music, the raags, the scales, the eternal roots. After descriptions of cobras and monkeys and blue-skinned gods, after prayers for rains of peace and the advent of love and a sky without limit, there is one haunting passage from that same song, 'Journey?. It tells us of a: Complete feeling of timeless joy …I want to sit on this step forever and watch the world go by. Everything, everywhere in one moment, in one place. And peace reigns. Yes.

And then comes the santoor. George Macfairlaine-Reid plays "Raag Puriya Dhanashri" to take us back to where we started. In this Global Village in which we are all destined to live in each other's backyards, it is that music which spills over the garden fence by which we will better come to know our neighbours. Eternal Roots not only allows us to hear those sounds, it set out to carefully dismantle the fences. 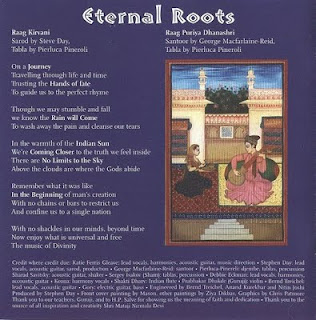 Author unknown (for me)