The history and searching the origin of this CD lasted almost one month. Why? As I have already mentioned at the beginning, I had her CD at home. I started my research when I get the information from Debbie that the CD has 16 pieces of music and my CD had only 15. Debbie sent to me her CD cover and it was completely different. Her CD had also different order of music, but otherwise it was the same… 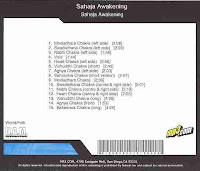 What is this CD about? It brings 15 short pieces of music in which Debbie sings mantras for individual chakras, goes through individual channels and chakras. It is quite simple; just sit down before the picture, light your candle and lose yourself in meditation. Compelling voice of Debbie Eckman is a reliable source which will get you easily to such meditation. 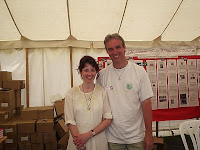 We should have met with Debbie Eckman at Adi Shakti Puja in England. We did not agree exactly the place and time, we simply knew that we will meet each other. After my arrival I tried to find her with my eyes in a thousand people crowd, but I did not find her. I had given everything to Shri Mataji and asked to arrange it.

The Friday evening programme was about to begin and I sat not far away from the stage and scanned my surroundings. Suddenly in one of the entrances a tiny woman appeared with the guitar on her shoulder. Vibrations told me immediately that this must be Debbie. She sat near the entrance, took bandhan and started her meditation. She had meditated for a moment and then she looked around. I knew she was Debbie according to the photograph.

I got up, went to her and said hello to her. We arranged our meeting later that evening, so that she could have prepared for her performance, when she played one of her new songs. Later we had met in the hall where we were selling the CDs of our Czech singer Lenka Adamova and we had a nice talk. The following lines give you the e-mail interview which Debbie gave to me in 2006 before my departure to England. 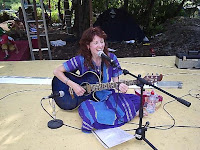 VH: Your musical emanate from beginning of learning piano and drums. Later you found out the power of your voice. How was the beginning with a music and how an indic music affected bloom of your voice? I have heard your demo and I have to tell that your scale and style is really astonishing. You are able to sing almost everything.

DE: Thank you! I don’t really remember when i first started to sing but there was always music in the house – my dad had a beautiful voice and loved to listen to Jazz in particular. He was the manager of a choir and all my family (2 sisters, 1 brother and my mum!) all joined at some point. This helped me to develop my ear for harmonies in particular as I started as an alto but then as my range grew, I became more of a soprano. Most of the music was of a Western classical nature, but with also some folk music and some popular. In the meantime, I continued to listen to all sorts of music at home and sang along with anything I could. I think this helped to develop my range.

I had many singing lessons, both at college and privately until I finally started learning Indian music, which I think has given me the most depth to my voice and also the most naturalness, as you are not meant to use anything but your natural voice, whereas Western Classical singing is sometimes a little artificial in how the sound is produced within you.

VH: In year 1994 you were in India for first time and you visited Nagpur. Could you be so kind and tell me about it. How it effected you and what musical beginnings were in Nagpur?

DE: I didn’t visit Nagpur at this time, but it was the first time I heard about the Academy as it had just started, with only 2 students I think – Sia Reddy from Austria and Nick Buff from Australia. I heard them perform and also was introduced to Babamama briefly which leads on to your next question....

VH: You met yourself a brother SM Babamamu. How was the meeting with him and how did you feel it?

DE: I felt so much compassion from him and also that he had so much desire to help the Westerners to understand Indian music. I knew I had a desire to come and learn at the Academy but wasn’t quite sure how it would work out, as I didn’t have much money.

VH: You returned back to London and worked in Wembley Arena. There I am sure you met many famous people especially in popular music. On your website you remember that you were addressed by the music of Robert Plant and Jimmy Page. And there connecting with eastern effects. How did you feel after comming back from India then?

DE: Working there was not as glamorous as maybe it sounds, as I was just selling t-shirts and souvenirs, nor did I really meet anyone famous! But I did get inspired many times by the great artists I was able to see for free and that concert in particular made my desire to go and study in Nagpur a reality. So, back to the previous question of how the beginnings of Nagpur was – we all lived in different apartments across the town and I was blessed to live in the same block as Babamama so we saw him many times.

The lessons were taught in the various apartments or in the homes of the teachers, depending on what you were studying and with whom. There were 15 students at that time (the start of 1996), mostly all from Europe. One day, Babamama took us all on a picnic to an orange grove some distance away from the town. We had to cross a small river to get to it and it immediately reminded us of the river in Cabella. He told us that he had bought the land and planned to build a proper Academy there, where we would be able to be in the nature all the time, away from the distractions of city life and able to concentrate just on our studies.

I also remember many times of spontaneous concerts we would give on the roof of a house where another of Shri Mataji’s brothers lived and which was called the original Academy. It was very close to a statue of the Late PK Salve who was Shri Mataji’s Father and who was the first mayor of Nagpur, I think. My feelings for Babamama became much deeper as he became like a father figure to many of us, especially to those, like me, who’s fathers had passed away. He was so caring and so interested in all of us, as well as always seeming to know what was in our hearts or minds. ( I think I didn’t answer that question exactly, but it spilled over from the last question!) 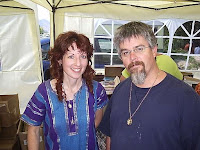