VH: You have recorded and produced the album by yourself. Why the title The Goddess Within and why without any co-players?

Yes I finally have my own album out in the world! It's now available on iTunes and Amazon.com - which just shows that this new day and age of the music industry is really shaping up to be made for the independent musician. Music is finally taking it's place above business. I always thought that the major record labels were due for some "karma" since they were founded on greed and money. How can a price be put on music? Counting Crows signed our record deal in the early '90's at 18 percent which meant that when a record sold, we got 18 percent of the profits while the record label made 82 percent. And that was considered a "historic" and "generous" deal for the time! We were told that we need the label so bad that without them, the world wouldn't even know we exist so as a result the labels decided on the cut. It's payback time!! With the internet, distribution has become easy and free. Artists on youtube are making millions of fans totally on their own!

It's called "The Goddess Within" because it is comprised mostly of songs I wrote for Shri Mataji. In 1995, Shri Mataji asked me to write songs for Her and this record is a lot of those songs. Except for 3: The first one, "Our Queen" is a variation on a 1000 year old Celtic song about a King, "Hanging on a Star" is a song I've always loved by an English folk artist named Nick Drake, and "How You Are" is a separation song which I wrote. The rest are for and about Shri Mataji.

I did everything myself because I wanted to make atleast one record in my lifetime that I could call my "letter to the world". And by doing everything on my own, it felt more like my personal letter. It was very fulfilling to do one record this way. I think it also was a result of being "the bassist" in Counting Crows for 14 years - I had to let the "other cooks" have their say, that I sort of had to "get this out of my system"! 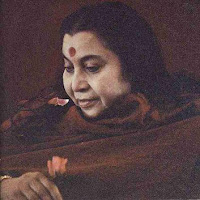 VH: I would like to know something about some of the titles on your CD. Let´s begin with the beginning. Our Queen – I like solo singing without musical support. Traditional , celtic motive and Steeleye Span´s inspiration. How did that come to your mind?

MM: First song, "Our Queen" - I'm a bit of a fanatic of British "folk rock". There are 3 bands who I idolize: Steeleye Span, Fairport Convention and The Pentangle. All from the late '60's an early '70's. Our Queen appears on a Steeleye Span record as "The King" and I've always loved their version but I always saw it as a "Goddess" song - so I finally recorded it the way I heard it!

VH: Feel – the first and the final tones mohan veena are replaced by the strong sound of the electric quitar. How do you perceive the connection of noisy rock music and silent sahaja meditation. Is it possible to combine that?

MM: Feel: Yes - I purposely did the approach of an Eastern, meditative beginning being "stomped on" by the loudest, crunchiest Western electric guitar I could think of! The contrast is what I was going for. People are always trying to blend East and West with a light, Western acoustic guitar so I thought I'd go for the "gross" approach on this one! The "bluntness" seemed to work so I kept it.

VH: Let´s go astray from your CD. Your teacher is Wishva Mohan Bhatt. How did he influence your development and what did you learn under his guidance? Is it difficult to play the mohan veena? What sort of instrument is that?

Shri Mataji told me to learn the "Mohan Veena" or "Indian Slide Guitar" on an airplane flight from Milan to New York back in 1996. I was so happy that I had direct instructions that I immediately made plans in my mind to pursue this with all of my heart. Mother even told me the teacher at the time in Nagpur, Prashant Probakhar of the Nagpur Sahaj musicians. In December of '97, Counting Crows took 4 months off so I went straight to Nagpur to learn from Prashant. I stayed in the Academy with the great Baba Mama and all the students at the time. As Mothers' Birthday Puja was approaching in March, Baba Mama came to tell me that he managed to book Vishwa Mohan Bhatt to perform at Mothers' 75th birthday celebrations - I was amazed and so excited!!

As Bhatt was tuning on the stage for his performance in Delhi, Shri Mataji and Sir CP were also seated there on the stage watching. Then, Mother called me to the stage! Baba Mama took the microphone and announced, "Can Matt Malley please come to the stage?"

I went up and namaskared to Mother, who started talking to me about Bhatt's guitar! I remember She was telling me how the secret is "in the bridge". I was blinking, sleepily and stupidly, while Mother was working out something in the cosmos. She then had me sit next to Her and watch Bhatt perform. It was the most magical musical event of my life. Afterward, Mother had me hand flowers to him and his tabla player - they just looked at me thinking, "who are you and why are you giving us flowers?" while I smiled wildly.

Then, one year later in '99, my wife Sesh and I were at Birthday Puja again and afterward we were in Delhi at a music store and I was buying my first professional Mohan Veena. We went right to the airport to catch our plane and who is standing right next to us checking in his luggage but V.M. Bhatt! I told him that I just bought my first Mohan Veena and he was very kind. He was on his way to perform in England at the Albert Hall, I believe.

Ok...then, fast forward to last year, '07. I went to see Bhatt in concert in San Francisco and went to meet him after his show and ask if he is accepting students so he gave me his email and said to contact him for lessons when he is in the States. A few months later, in October, I saw on the internet that he was coming to LA and I wrote to him. He ended up at the Ashram here in LA for 3 nights of recording and lessons in my studio with his table player - it was magical. Then this year, in Feb/March of '08, I was at Birthday and Shivratri pujas in Pune and I ended up at Bhatt's home in Jaipur for one week taking lessons from him and his son, Sahlil. A musical mountaintop!

Bhatt was once again in LA in April and he performed at the Sahaja Yoga center here in LA and also recorded an entire album in my studio - and he told me to put bass guitars on his recordings! I am the happiest bass player on earth this month as I am making a world music record with Bhatt and his table player! When we're done we're going to shop the recordings to world music labels. I can't wait!!

The Mohan Veena is a difficult instrument, just because Indian Hindustani Classical music is such a deep lake. When Bhatt plays one note, you can hear all of India and it's glorious history in that note. When I try to do the same thing, it's got an American accent and is a shallow pond when compared! But it makes the ears more subtle and when I go back to playing pop or rock music, everything is like a big balloon of notes and instruments...Indian music is like jedi training for a musician!

VH: Lovely Eternal – this is my favourite piece. I think that it belongs to the second half of the 90-s and to the band IPO. How do your remember the time of this recording and what did that mean for you? Did you study Vaitharna (If And When has the similar feeling – excellent arrangement and a wonderful song).

MM: Thanks for liking Lovely Eternal and If and When!! Lovely Eternal was originally recorded for the IPO record - but at the time I was sick, on tour with C. Crows, and the guitar was out of tune. I was so happy to re-record it for my record in better quality and not "rushed" for time.

I didn't study at Vaitharna but I was in Nagpur when it was Mothers' home at 4 Red Cross Road in Nagpur. Not Her birth home, but the family house at a later time. Then Baba Mama had us all move to the new Academy land in Nagpur and it was such a magical time for us all. He was like a lion - such wisdom, he commanded a fatherly respect from us all. And when he was sitting near Mother on the stage, he looked so small and humble! Magical times for all of us. 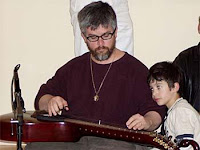 VH: Into the Silence – possibly your latest piece. It was also present in the compilation of the American yogi last year at Krisna puja. Where did you find your inspiration and what is the meaning of that song?

MM: Into the Silence is my most "radio friendly" song - I even licensed it to Mtv and some other television show here in America - they only used snipets of the song but it was nice to see it get played on tv! The words came because I sat down and decided that I wanted to write a song about how everything, every thought, plan, ambition, material object - everything - is just flowing in a stream to someday melt in the ocean. I just replaced the "ocean" with "silence" and it sort of came together and the song wrote itself.

VH: How Are You – I am smiling when I hear the influence of the 70s. (the Beatles and Paul´s bass quitar, vocals of ELO). Magic Garden has also similar sound but it is more gentle. Is it there, this influence?

MM: "How You Are" is a little "bitter" and about separation. It's not about Mother, but I realized that since it "came through me" and I liked the recording that I'll include it on my album. Also a radio-ready song. I liked it's "dryness" in the sound. Yes it's very '70's and that's a Hoffner Beatle Bass on the song!! 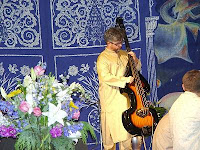 VH: The Downing of Your Way – I heard this song for the first time in England at Adi Shakti puja at the CD 1-1. An excellent piece – organ, quitar and perfect ending of the CD. Are you satisfied with this CD and how do you feel about it?

MM: The Dawning of Your Day - I was going for a Neil Young vibe with the guitars. The lead is played with one finger, sort of like Neil might play!

I am very happy with my little home-made cd! I spent a lot of time on it and it's so fulfilling to be a musician in this day and age when we no longer need help from anyone. We can be our own record labels, since digital recording equipment has finally become affordable and recording studios are becoming extinct, along with record labels. The internet is the new store-front. Still though, musicians have to play live - tour to exist in the world. It's a 2 sided coin - the studio and the stage and all modern musicians have to become familiar with both to be fully successful!