In the midst of today’s hectic, non-stop timetable people are increasingly stopping to ask themselves two fundamental questions:

2. How can I evolve as a person? - become a more spiritual and compassionate person - understand more about my place in this Universe - establish a relationship with God that is based on Truth not ritual and hypocrisy. If you recognise any combination of these needs in you, then you are part of a growing community of people who are becoming uneasy with the direction and quality of their life. Sahaja Yoga can help to answer these needs through the ancient, gentle and yet powerful process of Self-Realisation and meditation….. 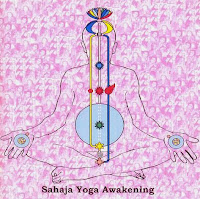 Such is the introduction in the CD booklet named Sahaja Yoga Awakening. The author and performer of this music is the English singer and guitar player Deborah Eckman. I found this CD in 2003 on the server MP3.com, where I could listen to the first samples of mantras singing for each individual chakras. It was very easy to order this CD and it became the part of my sahaja yoga music. Althought the CD cover talks a lot about Sahaja yoga and Shri Mataji, about chakras and mantra influences, I could not fint the name of the performer. After a long time I came across her name on the internet sahaja radio. It did not take a long time and I managed to get her e-mail address from my musician friends. I wrote to her and ask for the interview. Debbie was very helpful and it was pleasure for her to answer my questions. Slowly we put together the pieces of her mosaic – a nice story about the origin of her CD, how Debbie came across to know Sahaja yoga and how she studied in the Academy. The following lines will give you detailed story of her life experiences. Let´s get to the beginning… 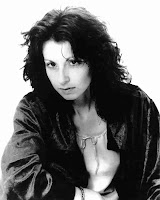 Down the ages, music has always been food for the soul. The Australian aborigines say that Music is your soul speaking .. it is the voice of our planet communicating to the universe. In India, it is valued above all things - a way of connecting the individual spirit with the Divine. Ancient sages discovered the 7 basic notes of the musical scale by listening to the sounds of nature or songs of individual animals. In meditation, we can feel that each of these 7 notes corresponds to the 7 chakras -or wheels of energy - within us. When the frequency of the note matches the frequency of the chakra, that chakra becomes activated and thereby strengthened. By singing or even just listening to the different notes, we can help to balance and ultimately heal our chakras.

My musical awareness was very typical for a western family - jazz and musical theatre, with a smattering of classical, courtesy of my parents' taste, as well as a healthy dose of pop from my two older sisters. Apparently, I was dancing in my crib before I could walk, so it was obvious that music would play an important part in my life. I grew up taking an interest in ballet and tap dancing, as well as learning the basics of piano and drums, but the voice was my main instrument, graduating from choirs to solo performances. But it wasn't until I became aware of Indian music that I realized the full potential of the voice. I found my way to Sahaja Yoga nearly thirteen years ago, desperate to fill an emptiness that even music couldn't heal. At that time, Indian music was quite alien to me - a weird tinny sound that I heard from Bollywood films. But gradually, through listening to more Classical Indian styles, my ear became accustomed - first favoring the rhythms of the tabla (reflecting the heart chakra), then the flute (the Vishuddhi in the throat), finally allowing the range of instruments to educate me in its complexities.

At the end of '94, I went on my 1st trip to India and met briefly one of the most important musical influences in my life, H P Salve - affectionately known as Babamama - Shri Mataji's younger brother. He had started a Music and Fine Arts Academy in Nagpur, India in memory of his father P K Salve, in order to enrich and enlighten Westerners' awareness of Indian culture. At that stage, it was just a few pupils housed in various apartments around town, attending classes with teachers at their houses, or with the teacher coming to them. The seed of desire was planted then in me, but it wasn't until later that I knew I had to attend the school. Ironically, it was through seeing a rock concert at Wembley Arena in London (where I was working at the time) that the desire became truly manifest. Robert Plant and Jimmy Page were combining their talents with Egyptian and other Arab musicians in a tapestry of fused styles. I knew that it was something that I wanted to try - mixing my own style (jazz/pop) with Indian Classical. I went to Nagpur for 3 months at the beginning of '96 but it was only a glimpse of what was involved. I had the basics but not the confidence to use what I had learnt in a practical way. I continued to write my own songs but they were not fusing the styles as much as I wanted, so the seed of desire grew again - I knew I had to return to the Academy!

At the end of '98, Babamama invited me back. By now, the Academy had its own land amidst peaceful orange groves. I spent 5 and a half months learning about the link between the notes and the chakras, as well as forming a more thorough knowledge of different Ragas and how to adapt the voice to suit them. Sadly, Babamama died in February 2000, and the Academy in Nagpur had to close down. But it did recently re-open on a new site near Thana and Babamama's legacy lives on through all the people he touched with his unique talent as a musician and poet, as well as his humour and constant encouragement to keep trying. He would always invite his pupils on stage at public performances, even when we protested that we didn't even know the songs! It was his way of showing us that we belonged there - that the music was inside us anyway. Since then, I practice most days and my voice has much greater flexibility and resonance. More importantly, inside, through using these techniques, I feel more in tune with myself. My music too has changed and reflects more accurately all the different influences in my background.

Sahaja Yoga not only opened my eyes to a truth that was within me from before birth, but opened my senses to a profound way of connecting myself to the Divine. We are all capable of being musicians, poets, artists - it is just a question of tapping in to that unlimited potential within us. The Kundalini, the Ruh, the Tao, the Rainbow Serpent, the Paramchaitanya, the Chi - it is all One and the same....

Christopher Klacsanzky said...
This comment has been removed by the author.
January 9, 2009 at 1:02 AM

Do you know of any talks given by Shri Mataji Nirmala Devi about the link between the chakras and the notes?